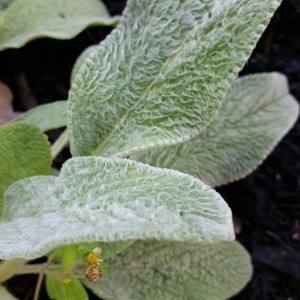 If you are looking for a deer resistant, low maintenance and drought tolerant perennial, Lamb’s Ear is the ideal plant for you. Resembling the down-turned, soft ears of a lamb, Stachys byzantine, commonly called Lamb’s ear, is a low growing, soft textured perennial with fuzzy, greenish-silver leaves. It grows from 6”-8” tall, and spreads to 12”. Although mostly grown for its foliage, it will produce a spike-like, purplish-pink to white flower in spring and summer.

The best location to plant lamb’s ear is in a spot with part-sun to sun conditions with well-drained soil. Lamb’s ear can survive in most soils except wet; it will rot if kept in an area with standing water or if watered too much.

Lamb’s ear will easily grow in zones 4-10, but in areas with hot and humid summers, such as the San Antonio area, it may turn brown from heat stress if not placed in a location that receives some afternoon shade. Lamb’s ear also will self-sow, and can be propagated by dividing the roots, which should be done every three years to encourage new foliage and to prevent root matting. It can also be sheared if it is becoming leggy.

This versatile perennial can be used as informal edging along a path or flower bed, in groups of three or more, as a container plant and is tolerant to grow just about anywhere. Lamb’s ear’s rich texture and silver color is beautiful when contrasted against darker foliage plants and even boulders in a rock garden.

The two most used varieties are ‘Helen Von Stein’ and ‘Big Ears’. ‘Helen Von Stein’ variety has the most tolerance to stress from hot and humid summers as mentioned above. It flowers either sporadically or not at all, and does best in zones 5-10. Its silver foliage grows 12”-18” tall and spreads 24” wide. ‘Big Ears’ variety is a bit larger than the average Lamb’s Ear, 10” high and 18”-24” wide and has greenish-gray foliage.